The influence of body awareness

The influence of body awareness on instrumental sound (Follow-up) 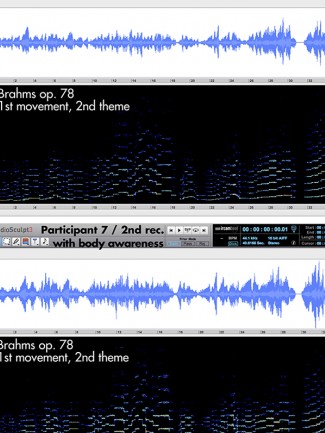 The inclusion of somatic practices as a part of music education curricula is fairly recent and only little research has been conducted in this field up to now.

In a pilot study with high string players (HES-SO, 2014), we combined recordings, interviews, questionnaires, and sound analysis to explore the influence of conscious body awareness on musical performance and instrumental sound.

Our first findings suggest that conscious body awareness during performance is reflected in an increase of sound continuity as well as sound spectrum density and energy. During short interviews, participants from the music colleges of Neuchâtel and Lausanne often stated that the increase of sonic density was accompanied by the awareness of a greater arm weight or of a moment of relaxation. Furthermore, participants reported improvements in physical well-being and musical expression, as well as a reduction of performance anxiety. The sonic data we collected were characterized by a high variability due to the individual ways of instrumental playing, and this diversity was further amplified by the different instruments, various tones/musical passages, and individual distances from the microphone.

The present follow-up study aims at examining whether the number of variable parameters can be reduced in order to facilitate the interpretation and objectification of the data. In addition, we will explore in an experiment with a lyrical passage whether a control group brings valuable further insight. In doing so, we hope to gain more knowledge about the potential of our methodology for future and interdisciplinary research.