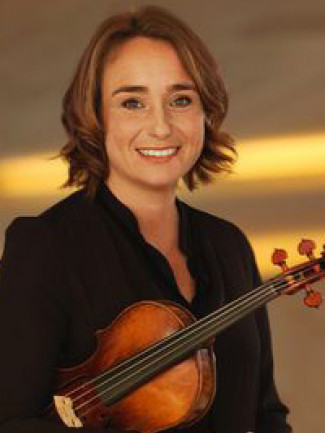 Aline Champion was accepted into the Haute Ecole de Musique of Geneva at the age of 12, thus becoming the youngest student admitted, a record which stands to this day. The same year she made her solo debut at the Victoria Hall in Geneva. Since then, her career has blossomed throughout Europe.

She continued her studies with teachers such as Tibor Varga and Pierre Amoyal before joining Philipp Hirschhorn’s class at the Utrecht Conservatory in the Netherlands, finishing her studies with Viktor Libermann. She graduated with distinctions. Throughout her studies, Aline has had the privilege to work with artists such as Yehudi Menuhin, Sandor Vegh, Nathan Milstein and Itzahk Perlmann, all of whom have influenced her notably.

She has been invited to perform in some of the most prestigious concert halls, including the Royal Albert Hall in Londres, the Auditorio Nacional in Madrid, the Berlin Philharmonic, the Tonhalle in Zürich as well as the KKL in Lucerne. She has also performed at the Lucerne Festival, at the Mostly Haydn Festival in London and the Easter Festival in Baden- Baden. Passionate about chamber music, she has collaborated with Murray Perahia, Tibor Varga, Katia et Marielle Labèque, Emmanuel Pahud, Marie-Pierre Langlamet, Christian Poltera, Baiba et Lauma Skride, Markus Groh and Wolfram Christ.

Alongside her career as a solo artist, Aline became the concertmaster of the Cologne Radio Symphony Orchestra before joining the 1st violins of the Berlin Philharmonic Orchestra in 2000.
A devoted teacher and pedagogue, she has been teaching at the Haute Ecole de Musique in Geneva since 2018. She was a tutor for several years at the Schleswig Holstein Orchestra Academy Festival, and is regularly invited to give masterclasses in France, Switzerland, the United States, Italy, Singapore and China. Aline graduated in 2017 as a certified Heilpraktiker in psychotherapy specialising in performance coaching and she regularly conducts conferences and seminars for musicians.

In 2005, she was honored by University of Shanghai with the title of Professor Honoris Causa, and in 2011, she was made an Honorary Professor of Christchurch University in New-Zealand. Aline was also awarded an honorary citizenship by the municipality of Plan- les-Ouates in Switzerland. As a member of the Berlin Philharmonic, she became an international ambassador for UNICEF in 2007.

Back to the previous page